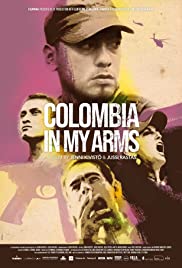 Colombia in My Arms 剧情介绍

In a strongly polarized and unequal world, can people find a common ground for peace?

The peace agreement between the leftist FARC guerrilla movement and the Colombian Government throws the country into chaos. Ernesto is one of many FARC guerrillas, who after 52 years of armed conflict, are about to hand over their arms in exchange for political participation and improvements for the 'campesinos', countryside farmers.

While Ernesto strives for a change in the society, this time using just words as his only weapon, a passionate right-wing politician and a descendant of Spanish conquistadors both want to rescue the country from FARC terrorists. Some seek even to tear the peace agreement to pieces. On the other hand, the deprived coca farmers could get out of poverty, but only if the peace deal is respected. Many feel that they won't get any justice unless they take it into their own hands.

The much celebrated peace process runs the torn-apart society into a situation in which everyone is afraid for the future and for their own survival. What happens to a very fragile peace in an unequal country if doing the 'wrong' thing may easily be justified as the only means of struggle? Are people capable of stopping the cycle of violence that has lasted for centuries?

'Colombia in My Arms' takes a close look at a crucial opportunity for a country to change. It is a film depicting people balancing at the edge of their morals while striving for contradictory dreams for a better Colombia.
本文为作者原创，未经作者许可请勿转载