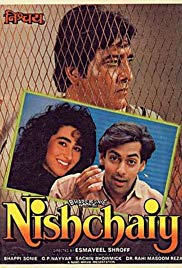 'Nishchaiy' is the story of two brothers, Ravi and Rohan Yadav separated due to unforeseen circumstances created by Ravi's employer Manohar Singh who suspects Ravi of having an affair with his wife Renuka. Ravi is sent to prison for a crime which he never committed and Rohan is adopted by Renuka's f